Which Birth Class is Best? 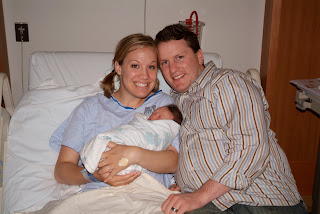 Before MyBirthClass both my husband and I were nervous about how the birthing process would go. We had no idea what to expect and did not even know where to start. I heard about the this class from a friend and thought that learning about the natural childbirth way would be a great way to start.

After our first instruction both Kevin and I were amazed by how much we didn’t know. I loved learning how to take care of my body and prepare it for childbirth. Becky was great at making us comfortable, answering our questions, and providing resources so that we could learn everything that we needed to know. She not only knew how to answer our questions using resources, but she had been through childbirth before so I knew that I could trust what she had said.

Our classes were group classes, of course, and it was exciting to be around so many people who were anticipating the arrival of a baby. Becky was great at leading the discussions and questions, helping all of us to learn what we needed to in order to have a successful labor.

While the class I took from Becky was a natural birth class, she taught it in a way that helped me to become confident as a mother and make decisions for myself. There was no wrong way, but the best way was what I chose for myself and for my baby. My birth did not go as perfectly as I planned, but because of all that I had learned I was much more comfortable making decisions and being in charge (as much as you can be) of how my labor went.

Right around two o’clock in the afternoon my water broke, but it being my first pregnancy, and not having it break in one large gush, I did not realize that it was my water breaking. I thought I had finally lost all ability to hold my bladder. It was pretty funny actually. I called my mother, pretty worried, and she laughed on the other line as she told me to pack up my baby bag and get Kevin, my husband, and head to the hospital. It was 3 weeks before my due date, so Ethan’s arrival was definitely not expected.

We arrived to the hospital and sure enough my water had broken and I was dilated to a 3. However, I was not having any contractions. On top of that, earlier I had learned that I was positive for Strep B so I would need to get the antibiotic. The doctor’s wanted to start me on petocin and while I was hesitant, I allowed it. As expected, an hour later the contractions picked up and were coming steadily. Soon after that, not knowing how long it would take for my labor to continue, I was very nervous that the pain would only get worse and I decided to get an epidural. About 2 hours after my epidural, just after midnight, Ethan arrived. While I did not go natural and not everything went as planned, I still had a positive experience because of everything that I had learned in Becky’s class. It really is true that the more knowledge you have, the less scary an unknown situation, like childbirth, will be.

My second chlidbirth went more smoothly. I felt like I was able to relax more and to concentrate on controlling the pain. I was able to stay at home for most of the labor and because I was calm, the pain was very manageable. Kevin was even able to help me this time using some of the partner techniques that we had been taught in Becky's class.

-Ann Arbor, Michigan
Posted by MyBirthClass at 9:35 AM