Breast-fed infants take in more than just nutrition with their mother's milk. The American Academy of Pediatrics call breast-feeding "the ideal method of feeding and nurturing infants." Like a magic elixir, the milk promotes the nursing infant's general health, growth, and development, while significantly decreasing the risk of infection. Breast-feeding has also been related to possible enhancement of cognitive development. It protects the nursing infant against a slew of diseases, including diarrhea, lower respiratory infection, otitis media, bacteremia, bacterial meningitis, botulism, urinary-tract infection, necrotizing enterocolitis, sudden infant death syndrome, insulin-dependent diabetes mellitus, Crohn's disease, ulcerative colitis, and allergic diseases. And, of course, there is evidence that mothers' milk protects against lymphoma and carcinomas.

Several studies indicate that breast feeding may induce an infant's immune system to mature more quickly than that of a formula-fed child. For example, breast-fed babies produce higher levels of antibodies in response to immunizations. And animal studies indicate that the intestines develop faster in newborns that nurse on mother's milk.

For these reasons the Academy of Pediatrics has some strong recommendations:

-Human milk is the preferred feeding for virtually all infants, including premature ans sick newborns.
-Breast-feeding should begin as soon as possible after birth, usually within the first hour.
-Newborns should be nursed whenever they show signs of hunger--increased alertness or activity, mouthing or rooting.
-No supplements (water, glucose water, formula, etcetera) should be given to breast-feeding newborns unless for medical reasons. Pacifiers should be avoided.
-Breast-feeding provides ideal nutrition. It is all an infant needs for optimal growth and development for the first six months.

Breast feeding also helps mothers. Nursing contracts the uterus and results in less postpartum bleeding and less menstrual blood loss over the months after delivery. Nursing women return to their pre-pregnancy weight earlier than those who don't nurse. Nursing improves bone strength (leading to fewer hip fractures in postmenopausal women) and reduces the risk of ovarian cancer and pre-menopausal breast cancer. Finally, beast-feeding is one of the best contraceptives going. It delays the resumption of ovulation in nursing women.

Despite these benefits, there are some situations in which breast-feeding should be avoided. A mother can pas harmful drugs and active infections to her child through breast milk. TB and HIV are prime examples. And infants who inherit a condition called galactosemia should not be breast-fed. Their inability to process one of the sugars in breast milk could lead to mental retardation. --P.R. Discover Magazine
Posted by MyBirthClass at 9:52 AM No comments:

What is an Episiotomy?

An episiotomy is a small incision in the tissue between the vagina and the anus just prior to delivering the baby's head. The purpose of the incision is to enlarge the birth opening during the pushing stage of labor. It's purpose may be to keep the perineum from tearing or to hasten the delivery.

Many doctors do routine episiotomies on every patient. Others evaluate the need before making the making the incision. Some doctors will massage and stretch the perineum to avoid the need for an episiotomy.

You can decrease your chances of an episiotomy by stretching the tissue in the weeks prior to birth by doing squats, sitting cross legged, toning the kegel muscle, and massaging your perineum with olive oil or grapeseed oil.
Posted by MyBirthClass at 9:41 AM No comments:

What is an Ectopic Pregnancy?

Ectopic means "Out of Place!"

In a normal pregnancy, the fertilized ovum descends into the fallopian tube and eventually into the uterus where it implants and begins development. Unfortunately, on occasion the body doesn't do it's job quite right and in a very small percentage of cases the fertilized egg develops in the tube. In some exceptionally rare cases the egg can implant in the abdominal or pelvic area outside the womb.

Women who experience early signs of sharp or dull pain in the abdomen, vaginal bleeding, weakness, dizziness, neck or shoulder pain, or headaches should consult their doctor. Failure to identify an ectopic pregnancy can result in excessive hemorrhage or death of the mother.
Posted by MyBirthClass at 9:33 AM No comments:

Posted by MyBirthClass at 9:33 AM No comments: 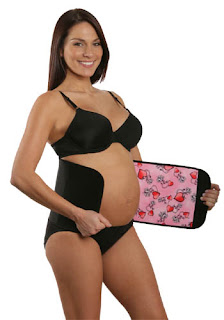 -
-
-
-
-
-
-
-
-
-
-
-
-
-
-
You can learn more about this product by visiting their home website. But I've also attached a link to their press. http://www.bellybandit.com/press_celebrity.aspx Honestly, these pregnant celebrities know that stretched out swollen abdomens don't just snap back into shape on their own.

I didn't know about this on my first baby, hence a missed opportunity. But I was ready with baby number two and the difference was amazing. It helped cinch my loose hips back together again as well...only I didn't know there was a belt specifically designed for this purpose so I just used a super strength Velcro back brace from a local medical supply store. It cost $20.00 but probably wasn't as ergonomical or comfortable as this hip tummy trimmer.
Posted by MyBirthClass at 12:41 PM No comments:

Some pregnant women report an almost immediate response of uterine contractions in relation to pressure application on specified points. When applied properly there may be a feeling of tenderness or sensitivity. But as always the efficacy of acupressure varies from case to case.

Hoku pressure point to induce labor: This is the point that is in the webbing between the thumb and the index finger. The point where the bone of the index finger connects should be pressed with light pressure and massaged firmly to stimulate labor contractions. Press on an angle underneath the bone that connects with the index finger. This may also act as a natural anesthetic to pain in labor.

The Trapezius Muscle: This is the muscle that connects the shoulder and the neck. The pressure point is located about an inch or so below the highest point where the muscle connects with the neck. The soft spot there is where the pressure is to be applied at intervals. Press this tender spot intermittently to start uterine contractions

Spleen 6 Pressure point to induce labor: This point is located on the inside of the ankle between the Achilles tendon and the ankle bone. Knead this area for at least a minute. Experts claim it propels the baby’s head down into the mother’s pelvis.

Additionally, approximately 5 centimeters above the ankle bone is a pressure point, which, when massaged may help to strengthen contractions that may yet be weak and ineffective.

Pros to Pressure Point Induction: May quicken or intensify labor

Cons to Pressure Point Induction: May result in an uncomfortable false labor
Posted by MyBirthClass at 1:41 PM No comments:

Many women anxiously seek alternative methods of labor induction during pregnancy. Unfortunately, most of these home remedies aren't very effective. Why? Because your body isn't just being stubborn to annoy you. It has a very complex network of hormones and muscles that need to balance properly for a happy and healthy birth.

Labor doesn't have a lever like a light switch that you can simply flip on and off on a whim. But if you're contracting and you want to test whether or not it's false labor there's something you can do.

The roof of your mouth has a very sensitive pressure point that responds by stimulating uterine contractions. It also induces relaxation. Which is a fantastic combination!

Some doulas recommend pressing the roof of your mouth with your tongue. Others suggest using your thumb and sucking it to apply a little more pressure. I recommend lollipops.

Pick your pop. Dum Dums are great! Besides coming in a great assortment of flavors, they're small and can fit into the smaller region in the roof of your mouth. But eventually your Tootsie Pop or Blow Pop will fit snugly as well. This is a great way to soothe yourself while you're lounging in the tub, laying on your side, or awaiting a cervical exam.

So regardless of whether or not you can successfully initiate labor by triggering the pressure point on the roof of your mouth, you should induce some more effective uterine contractions as well as a stronger ability to relax.
Posted by MyBirthClass at 1:21 PM No comments:

I found this technical abstract by the USDA Agricultural Research Service very interesting. It's supportive of statements made by Dr. Oz in his book You on a Diet. So if you're trying to avoid gestational diabetes or pregnancy induced obesity read more. The verbage is a bit technical so I've bolded the pertinent points for your convenience.

But make sure you do more than just read the article, add a dash of cinnamon to your salads, cereals, desserts, smoothies, and warm drinks. Afterall, cinnamon is an appetite suppressant!

We have shown that cinnamon and polyphenols in the aqueous extracts of cinnamon counteract insulin resistance in in vitro, experimental animal, and human studies. The objective of this study was to determine the effects of cinnamon on insulin resistance, glycogen synthesis, and body composition using an animal model of the metabolic syndrome, the high fat/high fructose-fed rat. Four groups of male Wistar rats (n=10) were fed for 12 weeks with (i) High Fat/High Fructose diet (HF/HF) known to induce insulin resistance, (ii) HF/HF diet containing 20g cinnamon/kg of diet, (iii) Control diet, and (iv) Control diet containing 20g of cinnamon/kg of diet. Insulin resistance was documented using the hyperglycemic clamp, with significant decreases in the glucose infusion rates in rats fed the HF/HF diet. Addition of cinnamon to the diet led to a return of the glucose infusion rates to the values of the control rats. Consumption of the HF/HF diet also led to significant accumulation of mesenteric white fat that was not present in animals consuming the same diet with added cinnamon. In addition, cinnamon added to the diet led to significant increases in liver and muscle glycogen, especially in animals fed the HF/HF diet. These results demonstrate that cinnamon improves insulin sensitivity with the metabolic syndrome and suggest that these effects are related to less accumulation of mesenteric fat and enhanced liver and muscle glycogen.

A Study to Determine the Effects of Cinnamon on Blood Glucose